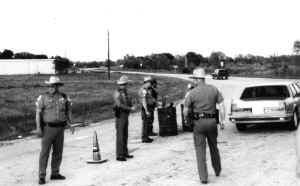 The Primary Checkpoint during the siege. This checkpoint, at the triangular intersection of Loop 340 and F.M. 2491. It was through this checkpoint that all media had to pass to get to Satellite City, just about three miles down the road.
These gentlemen are Texas State Police (not Texas Rangers). They had the primary duty at all checkpoints.
During cold or rainy weather, they had to man their post. The fifty-five gallon drum is their only source of heat during the cold and night-time hours.
The Mag Bag is the building off to the left. 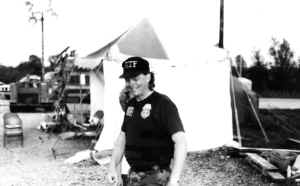 This is one of the young BATF "soldiers" standing in front of their tent at the checkpoint.
Though difficult to see, all of the BATF had covered their badges, allegedly in memory of those killed, to avoid being identified.

Waco, at times, reminded me of Vietnam. Except for black rather than olive green, the uniforms, equipment and ages were quite similar. Most wore web gear, bayonets and other accoutrements of war -- Young, idealistic and naive and only decades and oceans apart. 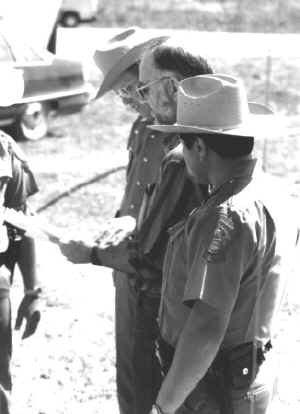 One of many legal exercises in attempting to bring the events to a peaceful resolution was the Criminal Complaint, prepared by Eric Lighter. Once completed, it had to be served. Gary Hunt is standing between the two State Police Officers, explaining what the complaint was. The Texas State Police were considerate and were as desirous as most of us in seeing a peaceful resolution. 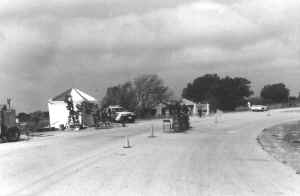 As you leave Satellite City, you approach the Checkpoint from the East.